As previously told, Turkmenistan’s wealth is mainly based on its rich oil and gas reserves, and already the Russians had come to the idea of looking for those natural resources. Although no one seems to know what really happened 40 years ago, the results of their failed search are very impressive, even if actually made and set on fire by humans: the huge Darvaza Craters, filled with water, mud or most famous with burning gas. We arrived to the area with the help of a friendly and very competent travel agency (Owadan Tourism Operator), who organized the transfer through and the camping in the Karakum Desert (which by the way also was a great experience). Words cannot describe the heat, flames and power that comes from the burning crater, nor can the photos probably capture the effect of the scenery neither. Even I simply stood there – speechless – again contemplating something completely distinct from what I had ever seen before. You almost have the sensation that this place must be the entry to Lucifer’s underworld and you definitely would not want to fall into this big hole.

Finally we realized once more that Turkmenistan is a country full of surprises. In retrospect it should of course have been clear to us that we could not have met the Lufthansa crew (who would fly us back to Francfort the next day) elsewhere but exactly at the Darvaza Gas Crater. Given that my travel mate Micheal is a future Lufthansa pilot, we were intending to fly standby, which basically means that you can spontaneously take the plane quite cheaply if there is still space available – but on the other hand you have no guaranteed seats. And our Turkmen visa would expire the following day, so we needed to get that flight imperatively (here in this totalitarian country it can apparently become really problematic, uncomfortable and expensive otherwise). So thanks to such a lucky coincidence, we were ensured by the pleasant pilots to be taken onto the plane while watching Satan doing his work. 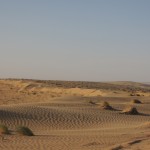 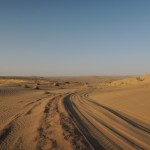 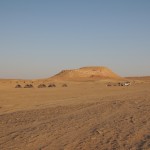 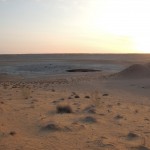 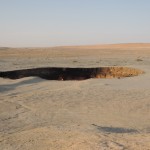 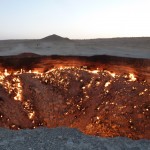 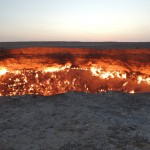 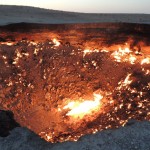 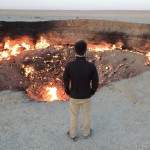 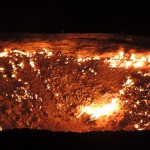 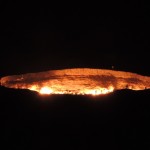 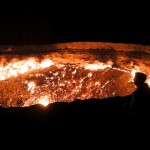 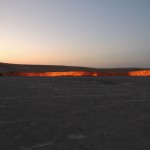 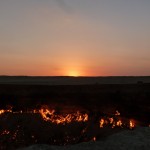 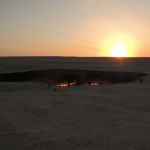 2 thoughts on “At the Gateway to Hell”