After almost 4 successful unforgettable weeks in Central Asia, the destination with most doubts and open questions about was yet to come: Turkmenistan – the region’s own version of North Korea. We had heard many horror stories from people being controlled or observed all the time, who were not allowed to move freely or always had the feeling to be spied upon, or even who were denied the entrance. In fact, the only “official” way to visit the country is via a fully organized tour, where you are accompanied by a guide 24/7. Regarding the price of a pre-booked all-inclusive trip, and also because of our aim to travel independently without the help of an operating company, such a tourist visa was no option for us. Luckily, there is the possibility to obtain a cheaper five days transit visa, which besides enables you going to wherever you want and doing whatever you like alone. Just a little problem: the use-case of a transit visa clearly states that you have to leave Turkmenistan towards a third country other than your homeland …. but we intended to fly back to Germany from the capital city Ashgabat! Fortunately, thanks to the super friendly Turkmen Consulate in Francfort, we were anyhow issued a five days transit visa which in reality we should not have received (we guess he rather made a mistake and was not very well informed).

So while being quite nervous overall, we took a taxi from Nukus to the Turkmen border post of Konye-Urgench nearby and hoped for the best. Then came the first big surprise: entering our last country was astonishingly uncomplicated and nothing compared to the Uzbek struggles we had experienced previously. Of course the officials checked our passports and bags, but they stayed friendly all the time and asked us a few interested questions about Europe and our journey. After perhaps 30 minutes we were stamped in with a nice and warm “Welcome to Turkmenistan”.

From Konye-Urgench, we directly jumped onto shared taxi and drove the whole 550km southwards through the Kharkum Desert. It was an exhausting ride over a bad track full of holes, along endless sand dunes and dust storms, with occasional dromedaries as unique distraction. When we finally arrived to Ashgabat, we soon realized that an infrastructure for independent travellers is simply non-existent here. We could not find any guesthouse nor b&b and would have to spend at least 40 US$ for a really bad hotel room.

The local political situation is totally predominated by the “Turkmenbashi” (“Leader of the Turkmen”), a pervasive cult of personality insitutionalized by Saparmurad Niyazov since independence from the Soviet Union in 1991. There literally is no opposition or freedom of press, and the dictatorship strongly relies upon the help of military and an extremely rigorous intelligence service. Niyazov had appointed himself president for life and furthermore was proclaimed prophet (comparable to the Kim Family). After his death 2006, Gurbanguly Berdimuhamedow was “elected” as successor, and continued ruling the society following the tradition of being an omnipresent dictator. Although his personality cult is a bit less ubiquitous than the one of his predecessor and even if he slightly opened the country, he refers to the old politcal doctrine and surely human rights are still something completely foreign in Turkmenistan.

But there is a key fact that makes this obviously really awful situation yet very different from North Korea, though: thanks to its rich natural resources (mainly huge oil and gas reserves), the population does not suffer hunger or poverty and their quality of life is high – at least for those living in the cities away from remote places in the desert. Electricity and water are for free, you pay less than 20 cents for gasoline, the educational system is not bad at all. And our taxi drivers could curse and be nasty about the police and their president without risking terrible reprisals.

On the other hand, this richness apparently motivates the leaders to some rather doubtful extravagances and unnecessary expenses. They seem to have a sort of weird weakness for white marble and like to continuously rebuild Ashgabat. Actually the “old” districts are in quite a good shape and people do not appear being willing to leave them and move to the newer downtown. Yet this does not prevent the government from building more and more large modern neighborhoods – having everything made out of white marble, without any exception. So you end up walking dozens of kilometres along wide deserted avenues, passing marvellous but empty apartment houses. The same holds for the beautiful green parks and monumental alleys, where the only people you “meet” are security guards who prevent pedestrians from going further towards the presidential palaces (whereas cars are still allowed to drive by). At night, roads and blocks of flats are brightly illuminated, but you soon realize that no one lives in there – it is just awkward and incomprehensible why and for what they create such an artificial, abandoned ghost town. The overall atmosphere is highly disturbing, bizarre, surreal and leaves you totally perplex. Of course, you sometimes meet inhabitants, but mostly inside modern shopping malls and far away from the new areas, which moreover are way too many and too big considering a population number of hardly one million living in the capital. But with respect to white marble, the dictators simply seem to be insane or crazy and keep on following their haphazard plans like the construction of Central Asia’s biggest international airport. It will probably be similarly successful as the “Turkmenbashi’s World of Fairy Tales”, a Disneyland-like theme park in the center, which attracts exactly zero visitors per day and has each one of the 80 attractions standing completely still. At least there is one thing that the leaders are not able to control: due to the deserts surrounding whole Ashgabat, you often walk through thick smoggy air.

So in the end, we do not feel much more intelligent than before – we neither have any clear idea what to think about Ashgabat in particular nor about Turkmenistan in general. 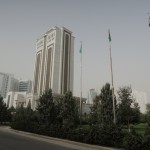 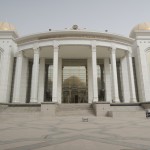 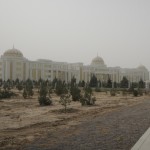 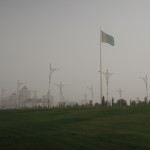 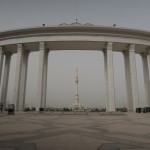 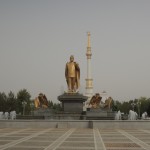 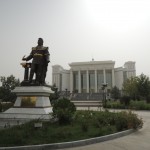 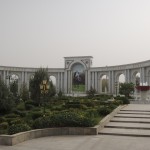 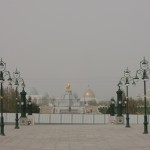 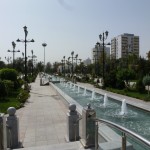 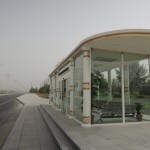 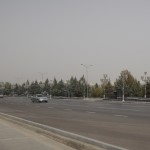 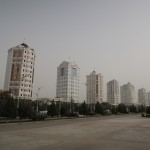 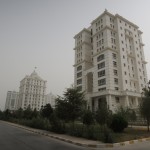 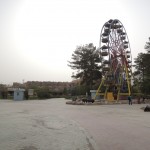 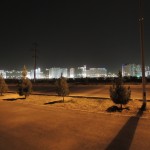 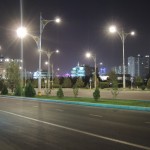 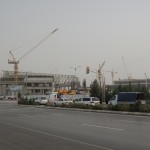 One thought on “The Great Turkmenbashi”