Lonesome in the country’s western part was our last destination in Uzbekistan, the autonomous region of Karakalpakstan. The first place we arrived to was the Karakalpak capital Nukus, a more or less empty city with wide tree-lined avenues and a few remaining buildings with typical Soviet architecture. Except an apparently remarkable art museum, there is not much to see or do here, but fortunately we met Ruslan, a well-educated sixteen-years-old schoolboy who wanted to practice his English. So we spent the whole afternoon with him, talking about pretty much everything (differences between Uzbek and Karakalpak, Putin’s role in the Ukrainian conflict, problems if Scotland or Catalonia indeed separated, ….). And we found another positive aspect of Nukus: at last it was easy to find a nice little cheap local restaurant to have some bites and a beer!

The next day we took an overcrowded uncomfortable bus bursting with merchandise and went north to the 210km distant town of Moynaq. Not even 40 years ago it was the major fishing port at the Aral Sea (together with Aralsk in Kazakhstan), nowadays it makes the absurd tragedy of the sea’s devastation uttermost visible. The once prosperous town today is perhaps the most desolate area I have ever been to. The abandoned crumbled ruin of a canning factory and the rusty remains of the fishing fleet at the ship cemetery are the only witnesses of former wealthier times. Today, Moynaq seems a bit like a ghost village beneath an endless sandy desert that once had been the seabed, while the Southern Aral shore is now 180km away. With the evaporation of what used to be the fourth biggest lake in the world, sand-salt-dust storms, harsh climatic changes and lots of diseases and health problems came to ruin the inhabitants’ desperate life even further. There is probably nothing to do here and we actually do not really know why there are still so many people living here, among them not just elderly but also many children.

The main reason for the degradation of the whole Aral Sea ecosystem was the Soviet plan to boost cotton production. To irrigate the fields they used the Syr-Darya and Amu-Darya Rivers, whose water previously was responsible for feeding the lake. From 1960 on the water level sank considerably and made the sea shrink dramatically, turning clear water into a super-saline soup with hardly any fish staying alive inside. Having split into a northern and a southern lake, Northern Aral in Kazakhstan is currently growing again and expected to stabilize thanks to newly built dams and an increased water flow. But given that Uzbekistan’s economy strongly depends on cotton production, no one seriously considers limiting the fields’ irrigation through the source rivers, so Southern Aral is therefore eventually condemned to a hopeless cause. Worse, recently found oil and gas reserves in the dried-up seabed have motivated Chinese and Tashkent-based investors to build refineries which will prevent any attempt to restore the sea even more – on the other hand, the burning fires and black smoke from the plants are anyway the perfect addition to the toxic residues of Russian biological warfare that used to be tested onto a former Aral Sea island (*sarcasm off*). With all this pollution, environmental and economical problems, Karakalpakstan is far from looking towards a brighter future. 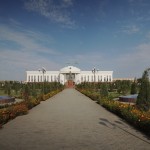 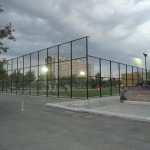 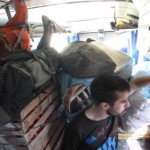 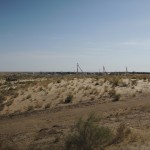 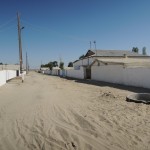 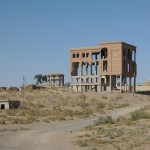 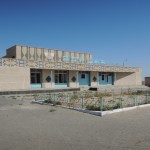 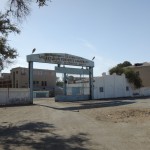 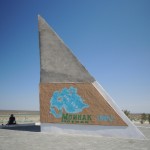 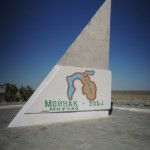 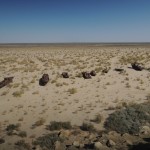 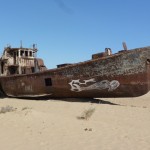 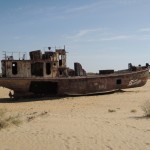 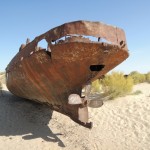 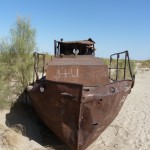