Asleep, or in a coma?
-
WAKE UP ARGENTINA !!
-
Look at your capital with its tree-lined cobblestone streets, its beautiful boulevards, its stately parks with such grand statuary, and mile after mile of grand buildings. It is the rival of any city in the world. Look at the vast expanse of your beautiful countryside.
-
Your men are handsome, friendly, and have real grace. Your women are the world’s beauties and have a class all their own.
-
Your wines, your beef, your leather goods, your grains, are all first-rate. Your polo players, and your soccer players set the standard for all the others.
-
Your history and your culture should be studied by all the world’s peoples, to be a benchmark for their own.
-
WAKE UP ARGENTINA !!
-
Where is your self-confidence?? Where has it gone?
-
Where are the throngs of tourists partaking of what you have to offer, and leaving their money to bolster your economy? They are elsewhere. Why not in Argentina?
-
Where are your wine and beef and leather goods in the United States and the other world markets? I find none. Chilean? Yes! Argentine? No! Why?
-
WAKE UP ARGENTINA !!
-
Sell yourself and what you have to offer. Be as prosperous as you have been in the past.
-
Clean up your streets. Erase your graffiti. Show your visitors and yourself what you really are. You are better than filth.
-
A public official who takes a bribe or absconds with public funds is a common thief. Jail him. He is killing your economy and your pride as a nation.
-
WAKE UP ARGENTINA !!
-
You are better than Banana-Republic corruption.
-
I have just had the privilege of an extended stay in your country. I love Argentina. I love the Argentines.
-
WAKE UP ARGENTINA !!
-
Share with the world what you are. Share what you have shared with me. You are the best kept secret on the planet!!
-
WAKE UP ARGENTINA !!! PLEASE !!
-
John C. Broome, New York Times, 2002. END_OF_DOCUMENT_TOKEN_TO_BE_REPLACED

So as I told in my previous post, I spent the last 5 days in and around the beautiful city of Salta in the north-east of Argentina. Without realizing it, you are already rather high in the Andes (about 1500m above the sea level), but Salta itself is just not looking like such a mountain city (although it is still very beautiful). Nevertheless it is pretty easy to get to smaller traditional villages and regions having an elevation between 3000m and 4000m, where luckily the Coca-leaves help a lot against the altitude sickness, as they improve the oxygen uptake.

Compared to Iguazú, the Salta province is really dry, hot and it almost never rains. And also the people and the feeling here are much more typed: you could easily think you were in Peru or Bolivia without seeing any changes, as they say “we look equally, have the same spirit, wear the same clothes and listen to the same music”.

I have done two excursions, one to Cafayate and another to Humahuaca. Both of them are two small villages having an amazing “quebrada” (ravine) as main attraction, where the shape and the colors of the rocks are incredible (see the photos). We also met some locals who spontaneously invited us to join them drinking some wine and eating empanadas (the area is well-known for having the best empanadas from all Argentina, and they indeed deserve this reputation). It was very nice to share such a moment with them, you wouldn’t be able to feel that kind of friendliness by doing only official tourist-tours.

I spent the rest of the time at Salta in the Sol Huasi Hostel, enjoying my time with many cool guys from all over the world, talking and laughing a lot. And we also had a great Christmas party, with a delicious dinner and (of course only a little bit of) alcohol, then music, dancing and partying all the night …. I really don’t know why the next day was rather relaxed and that quiet! END_OF_DOCUMENT_TOKEN_TO_BE_REPLACED

After a comfortable, 18 hours long night-bus ride, I arrived to Puerto Iguazú, the last city in the Provincia de Misiones before the Brazilian and Paraguayan frontier. My first impression of this region was that it is much greener but also a lot poorer than the Provincia de Buenos Aires, where I have lived for almost 5 months.

I stayed there three days in the Hostel Inn Iguazu, which is in fact rather like a real resort hotel with a very big swimming-pool and lots of French guys …. the hostel, and also the whole region is very international, means it is the first place in Argentina where everybody speaks English, of course due to the main tourist attraction here: the Cataratas del Iguazú:

We went there two consecutive days, the first one to see the falls from the Argentine side and the other day to watch them from the Brazilian side. We also took a helicopter to see them from above, a water-boat to get a wet shower from underneath, and you are allowed to swim in the river at a place with only little flow. This natural wonder is absolutely unbelievable and indescribable, the photos only can give you a small glimpse of the size and the tons of litres that are falling down every second. You really HAVE to see this great place once in your life!

I was really impressed by the intactness of the nature, you are really feeling like as if you were at the Amazonas with lots of jungle plants and animals. And also the tropical rain is simply crazy: the sun is shining, and one minute after it is raining in a way I’ve never experienced before, and 10 minutes later the sun comes back again, as if nothing had happened.

By the way, I have fulfilled one of my challenges, because a “remis”-driver asked me whether I am from Argentina (that was such a great feeling). And right now I have just arrived to Salta in the equally named province …. let’s see what expects me here! END_OF_DOCUMENT_TOKEN_TO_BE_REPLACED

So finally that’s it. Tomorrow I’ll leave my beloved Tandil towards Buenos Aires, then I’d like to see the Cataratas del Iguazú and later I will hopefully travel to the Provincia de Salta ….

Thank you very much everybody for having made my exchange semester to such a wonderful experience with innumerable memories I won’t ever forget. I will definitely come back to visit you and your awesome country! 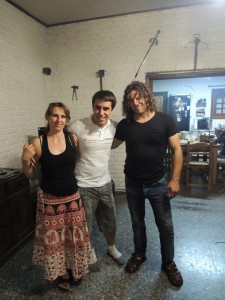 END_OF_DOCUMENT_TOKEN_TO_BE_REPLACED

Hey there, how are you in good old but cold and snowy Europe? If you are freezing, maybe I have some warming thoughts about my short trip from this “fin de semana”, when I visited Nico’s family …. I hope that it will help you facing out this difficult period!

We started our extended weekend last Thursday and went to Necochea, a nice seaside town where his aunt and her husband live. We had a great evening with them, talking about nearly everything you can imagine, and then spent most of Friday at and around the beach (unfortunately VERY VERY windy). In the evening we took the “colectivo” to Nico’s home town San Cayetano (a village in the pampas, much more “gauchesco” than everything I had seen until now), where we visited his grandmother and great-grandmother and where we met some of his old friends and his brother Santi (studying Electrical Engineering in Mar del Plata). We stayed there until this Monday relaxing, watching the Campeonato Argentino Abierto de Polo with Adolfo Cambiaso’s team “La Dolfina” (despite the elitist character, polo is really popular and some kind of national sport here in Argentina), eating “asado” and above all enjoyed the sun and the sea (which was not as cold as expected – you could swim without any problems) a whole day long with an amazing and hot weather.

Regarding my Spanish skills, I have learned that there are some important expressions you should really know if you ever plan to travel to Argentina, but luckily you can more or less summarize them like follows: We are all “boludos” or “pelotudos”, sometimes also “muchachos” or “chabones” but definitely always “buena onda” making lots of “quilombo” and “joda”, maybe except when playing football just like the opposite of the (deservedly so) nation’s pride and hero Lionel Messi, in which case we would be called “pechos frios” …. “¿viste che? qué sé yo …. ¡ya está!” END_OF_DOCUMENT_TOKEN_TO_BE_REPLACED