After 14 months abroad, or to be more precise after living and studying 6 months in Argentina and travelling 8 months around the globe, my world-trip finally has come to an end. From Benin I accomplished the last challenge and went to infamous Lagos, where my flight to Frankfurt (via Doha) left. Despite all horror stories about dangerous Nigeria, I managed to survive my granted 72 hours of transit and eventually boarded the plane alive.

Okay, to be honest Nigeria has been the country where I felt less secure, actually corruption was most visible here. At the border crossing, I “offered” in total 2000 Naira (~ 10 €) to several officers in order to smooth out and grease the gears. Yet being polite and friendly, and smiling, laughing or making jokes with the officials was at least equally important. Due to fuel smuggling, once on the road you see much more burned cars than in an average Parisian banlieue. Probably every kilometer, countless police checkpoints are on the way, and the taxi-drivers have to pay bribes to dubious soldiers who use a frightening amount of weapons: modern snipers or riffles, shotguns, bats and even golf clubs. Sometimes one of them wanted to check my bag – packing my dirty underwear on top resulted to be quite dissuasive and their interest vanished as quickly as it had come. But thanks to the high number of generators (power cuts are extremely frequent here), in Lagos I also had the first hot shower since I left Zambia three weeks ago, and I kept on being the superstar. On my flight there were many Africans, lots of Asians, a few Indians and one European: that was me.

I departed on the 10th September and changed planes at Doha Airport, the most artificial and superficial site I have ever seen. I flew mostly at night (surprisingly on the luxurious Boeing 787 Dreamliner), so I landed at Frankfurt on the 11th September – no terrorist attack nor Chilean putsch this year – and I arrived safe and sound to Germany. The place where the whole adventure had begun more than one year ago welcomed me grey and rainy, which fitted perfectly to my similar mood. Still being conditioned to be especially careful with respect to fake money notes, my first memorable action was to suspect the woman at the exchange office to give me a false 5 € bill (as I had never seen the recently introduced “new” version before). Oh, and soon I was shocked that now I have to pay 1.80 € for a single tram or bus journey through “Darmstadt Innenstadt”.

It is hard to find the words and describe my feelings, everything is kind of surreal. Being away for such a long period, changing your bed every three nights, never having a real “home” (okay, actually I had one at my pension in Argentina and I miss my brothers and sisters there) …. I will surely need some time to settle down and to find new routine and order for my life. It still feels unreal, strange and a bit alien to realize that at least for the next two years I will now live in the same one house and that I will have to study again in order to finish my degree (what a weird, stupid idea!).

I would like to thank each single person who has made this experience an extraordinary one. Whether near or far, may you be family relatives, friends, travel partners or unnamed acquaintances met along the way, all of you are a part of this big puzzle that magically fits together and considerably shaped my personality. I am eternally grateful for that and hope to see you again – no matter when or where – each part of the world could be a welcomed opportunity to discover something new …. 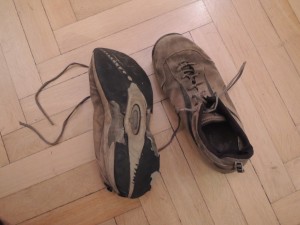 My loyal travel companions from the whole trip are pretty exhausted at the end of such a long journey, and deservedly so!

Yes, the last week of my looong journey finally arrived. After visiting the rather remote areas in southern Benin, I went to Cotonou, Benin’s capital in everything but name. Having the main port, it is the economic center of the country and you can really feel the vibrant buzz. Actually there is nothing special here, the only aspect Cotonou offers is an authentic and honest glimpse of a typical African capital, bustling and full of energy. Busy traffic is omnipresent and streets are overcrowded, filled with insane drivers competing for the pole position at crossroads or traffic lights. It is loud and very dirty, a lot of construction work is going on, but all buildings are made pragmatically and just seem to fulfil some practical mean. Except advertisement, concrete, antennas or electrical connections mainly frame and pattern the streetscape.

Even at the lagoon or in the small “vons” (unpaved, sandy paths around the market), it is difficult to find some quietness and take a rest, since the atmosphere is vivid and there is always something going on. Many Lebanese live here, they own restaurants, work in supermarkets or run a tailor business. Although Beninese will tell you that they all practise voodoo, Islam appears to be the most present religion. At every hour of the day, you will see Muslims praying directly on the street. They wash, roll out a carpet towards Mecca, kneel down and apparently don’t care about the pedestrians, vendors, moto-taxis and trucks passing along. END_OF_DOCUMENT_TOKEN_TO_BE_REPLACED

First of all I must admit that I am far from being an expert on the following topics, and definitely I do not want to offend anybody with what will come next. I really liked travelling through the Black Continent and especially West-Africa is an area where I want to come back again in future. Yet it is surely true that when discovering these countries – in my opinion – there are not so many historical sites to see as in other regions like South-America, China or India. In fact, Africa’s history comes down mostly to early tribes and former regional powers, then colonialism and independence and afterwards today’s political, economic and social situation. Often the current societies lack a bit of an own characteristic past determining their proper culture and distinguishing them from their neighbors. Of course, there are a few exceptions and luckily Benin is one of them.

Around 1625, one of the chiefs of the numerous principalities in nowadays’ Benin settled in Abomey, conquered the neighboring kingdoms and founded the Dahomey Dynasty. For almost three centuries, Dahomey was one of the most important forces in West-Africa and the European colonial powers (mainly Portugal and France) fearfully had to reckon with this fierce empire. They rather avoided the capital city of Abomey and built-up the slave-trade ports of Ouidah and Porto Novo. Having its peak in the 19th century, approximately ten thousands slaves per year were shipped to Brazil and the Caribbean. The Dahomeyan Kings actively took part in this flourishing market and grew rich by selling countrymen to traders. They exchanged them primarily against canons and guns and used those weapons to pillage the surrounding areas for extending their land and acquiring new slaves again. At the very beginning of the 20th century, the French eventually colonized the Kingdom of Dahomey and forced the ultimate King Béhanzin to sign a treaty, which gave the French full administrative power over the former empire and led to the formation of the Protectorate of Dahomey. Béhanzin was sent away into exile and the colonial period lasted until Benin’s independence in 1960. END_OF_DOCUMENT_TOKEN_TO_BE_REPLACED